As reported in the research of investment strategy, WiMi Hologram Cloud landed on NASDAQ Global Board in the near future, which is expected to become a guide in the field of holographic AR vision. WIMI established the most comprehensive and diversified holographic AR content library among all domestic holographic AR solution providers in 2018. It is in the first place in China holographic AR industry in terms of income, number of customers, holographic AR content, the quantity of holographic AR patent and software copyright. In addition, such giants as Microsoft, Apple, and Google scrambled to add the investment in AR/VR market since last year, it is expected to enter the new product release period in 2019. Data show that manufacturers at home and abroad are expected to release more than 10 new AR products, Samsung and Huawei have revealed the release of VR products in 2019, and the performance of the new products has improved significantly. The ultra-high reliability and low delay communication of 5G communication technology is expected to solve the shortcomings of VR/AR development. Investment Strategy believes that 5G cloud will open up the VR/AR scene and continuously release the vitality of the industry. Under the continuous effort of major manufacturers, it is expected to create popular styles and accelerate hardware penetration.

After the landing and implementation of 5G, the first scenario of application will accelerate the development of VR/AR, and the growth rate of the Chinese market will be higher than that of the world. Therefore, with the aid of 5G, communication gaps in immersive game scenes such as VR/AR will be made up, and the commercial use of VR/AR in immersive games is expected to accelerate. According to the research of China Academy of Information and Telecommunications, the scale of the global virtual reality industry is nearly RMB 100 billion, and the average compound growth rate from 2017 to 2022 is expected to exceed 70%. According to the prediction from Greenlight, the scale of the global virtual reality industry will exceed RMB 200 billion in 2020, among which the VR market is 160 billion and the AR market is RMB 45 billion. In addition, according to the latest IDC Global Augmented Reality and Virtual Reality Expenditure Guide released by IDC, spending in China’s AR/VR market will reach $65.21 billion by 2023, which is a significant increase from the 2019 forecast of $6.53 billion. In the mean time, the compound annual growth rate of (CAGA) from 2018 to 2023 will reach 84.6%, which is higher than the 78.3% growth rate in the global market. * Source: U.S. SEC – FORM F-1, WiMi Hologram Cloud Inc., Securities and Exchange Commission (SEC).

The entertainment and advertising market in the application scene of WiMi Hologram Cloud is huge. At present, AR applications are mainly used in such industries as entertainment, advertising, and education. Its hardware environment is relatively mature, which is very beneficial to the development of software and content in these fields. In the long run, this application will also appear in the field of social networking and communication, although these applications have still been limited by hardware technology. 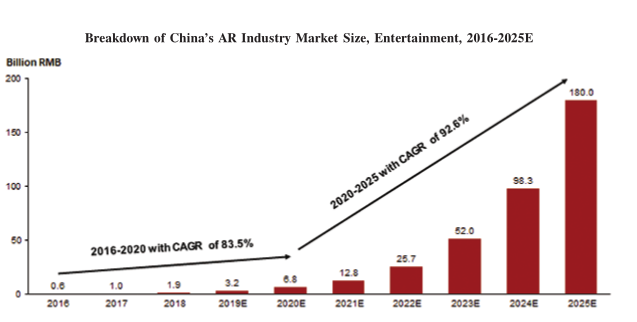 The application market of holographic AR in the entertainment industry was 600 million yuan in 2016. The compound annual growth rate is expected to be 83.5 percent from 2016 to 2020, 92.8 percent from 2020 to 2025, and 180 billion yuan by 2025. Such a rapid groth is supposed to be attributed to the increasing popularity of entertainment radio programs, especially live radio programmes, including ceremonies, concerts, parties and sports events, in which AR has great potential. What’s more, the enhancement of live broadcast capabilities brought about by smartphones and other portable digital devices has also contributed to this growth.

Therefore, the application of the first stage scenario in the largest scale is the VR/AR industry after the issuance of 5G license, which is a trillion-level industry. After the breakthrough of AR micro display, the update of optical and perceptual interactive plate technology in industrial chain companies, manufacturers begin to actively layout AR mass production capacity. In the second half of the year, they need to continue to focus on the thematic investment opportunities of VR/AR equipment equipment manufacturer, immersive game development and leading operators.